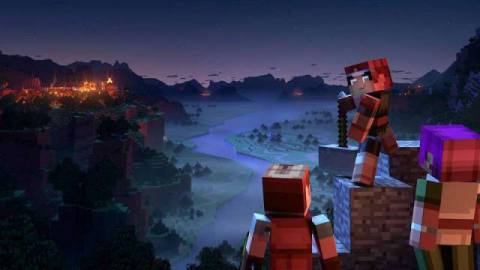 Why play Minecraft Dungeons solo when you can play with friends, no matter the platform? Minecraft Dungeons crossplay is finally coming to the game here soon, though cross-generational support is still up in the air regarding this feature.

The official Minecraft Dungeons Twitter account shared the good news with a recent video, saying: “Cross-platform play arrives on November 17 for Nintendo Switch, PlayStation 4, Windows, and Xbox One! It’s almost time to join forces — whatever platform you play on!”

Heroes, are you listening?!

Cross-platform play arrives on November 17 for Nintendo Switch, PlayStation 4, Windows and Xbox One! It’s almost time to join forces – whatever platform you play on! pic.twitter.com/wDusUWYYOY

It’s always nice to have crossplay as an option, though not as a forced choice. I primarily play on PC (a fact that makes me so sad when most of my co-workers play Overwatch on Xbox), but I do understand why a lot of console players are leary at being forced to play with other PC players. With hacks and cheats galore, it can take away from the play experience if you’re not only having to dodge enemies, but hackers as well.

Luckily, Minecraft Dungeons isn’t that cut-throat, so playing with pals, no matter the platform is a nice option to have.

Haven’t checked out Minecraft Dungeons yet? It’s an adorable co-op adventure that is done in true blocky Minecraft style. This action-adventure take on the Minecraft-verse is heavily inspired by classic dungeon crawlers and allows for up to four friends to take to the dangers ahead together. Swamps, canyons, dungeons, mines…you name it, you can explore it. Just watch out for the new-and-nasty mobs, they are everywhere!

Minecraft Dungeons is available now on PlayStation 4, Xbox One, Nintendo Switch, and PC.

What are your thoughts on crossplay now that Minecraft Dungeons is the latest title to offer this feature? Are you for being able to play together regardless of platform, or do you think that messes with the overall balance of online games? Sound off with your thoughts in the comment section below!