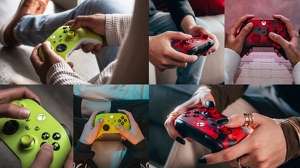 Microsoft has unveiled a number of new special edition Xbox Wireless Controllers, which it says marks another step toward more eco-friendly hardware for the company.

The newly revealed Xbox controllers come in two varieties. There’s the “high-energy” yellow Electric Volt – which will cost $64.99 USD when it releases on 27th April – and the red, grey, and black Daystrike Camo, which comes with a $69.99 USD price tag and 4th May launch date.

Microsoft is keen to point out these aren’t just new colour variants, however; it also draws attention to some production changes that, it says, continues the company’s efforts toward becoming “more sustainable across the Xbox product lifecycle”.