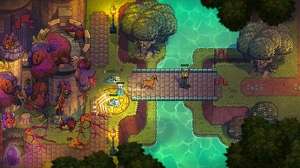 Microsoft held an ID@Xbox showcase last night, and as part of it listed 22 games coming to Xbox Game Pass.

Some of the games in the list below are already out on PC (Art of Rally, for example), and some we already knew were set to launch into Xbox Game Pass at launch (Narita Boy, for example). But there are 15 additions here, including the just-announced Nobody Saves the World, so it’s well worth shining a light on what’s coming down the content pipe.

My personal highlights here are Art of Rally, which Martin had good things to say about in our review, 1980s-themed side-scroller Narita Boy, which I’ve had my eye on for some time now, and Stalker 2, which is doing interesting things with its teeth. Chris Tapsell previewed Drinkbox’s Nobody Saves the World yesterday, saying it “has all the lurid zip and levity of Guacamelee, with an RPG twist”. And Emma was positive about Recompile, “a Metroidvania that makes hacking look beautiful.”