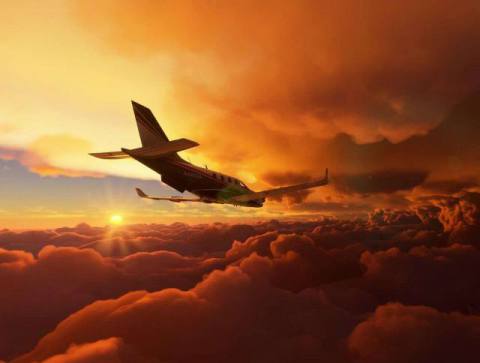 And Ireland could be getting a fresh lick of paint soon, too.

Developer Asobo Studio has revealed that it’s going to be tweaking Great Britain in the hugely popular Microsoft Flight Simulator.

In a Twitch stream, developer Asobo laid out its roadmap for future updates. Great Britain is next on the list, and it’s going to receive a lick of fresh paint in January.

The studio has said that it has an entirely new set of data to make England, Wales and Scotland in the simulator giant. Asobo doesn’t have map information for Northern Ireland, yet, so despite it being called a “United Kingdom” update, that isn’t quite the case.

The head of Microsoft Flight Simulator, Jorg Neumann, said that there will be between 50 and 60 points of interest on the map. The developer is using procedural tech to introduce buildings, including churches and cathedrals, to Great Britain. These are two of ten new building types the team is trying to introduce with this update. Oh, and there are a number of airports, too, including Manchester Barton, Liverpool EEGP and Land’s End.

“We have awesome data for England, Wales and Scotland,” Neumann said.

“We have a completely new set of aerials. Thank you, Bing, it’s really cool. We are trying hard to get data for at least Northern Ireland but we might as well do all of Ireland. We’re working on this. I hope to have an update there.”

This update comes in the wake of Microsoft Flight Simulator bringing a number of new airports and points of interest to the United States of America as part of its second world update earlier this week. The first area to be spruced up was Japan in September.

Microsoft Flight Simulator was released back in August for PC. In our review, we said it was “a remarkable release fit for seasoned pilots and beginners alike.”

Within two weeks of launch, the game had attracted more than one million players. Ahead of its release, analytics firm Jon Peddie Research said the game would help sell $2.6bn in hardware sales.