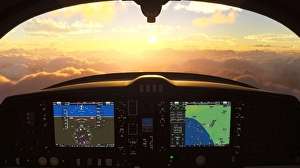 It’s already been quite a remarkable year for Microsoft Flight Simulator, the technically dazzling, gorgeously detailed celebration of all things aviation taking the sim mainstream, but the best has been left until the very last. The much-awaited VR update which dropped earlier this week does everything you’d hope for, and a little bit more besides.

As it’s getting on I won’t be able to go into full details until early next year, and apologies for the lack of capture – I spent yesterday in a tangle of cables as I got involved in the fiddly business of setting up a new headset, as well as being tangled in strings of Xmas lights as I put up the tree – but suffice to say Flight Sim in VR works a treat, the immersion it adds elevating it all to the next level.

Having initially been slated to debut on the Reverb G2, on which I’ve been trying it out, it’s commendable that the update is now available across all headsets. Indeed, convenience is baked into this update, with VR mode toggled on or off at any point with the press of a button. It demands a fair amount, of course – running on a 3070 I’m not able to come too close to the full resolution of the G2’s optics while maintaining a steady framerate – but it’s easy enough to find a sweet spot where the splendour of Microsoft Flight Sim isn’t diluted too much.