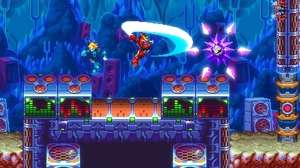 30XX’s predecessor – which released for Xbox One, PlayStation 4, and Switch back in 2018 (following around four years of Steam early access development on PC) – is a bit of a treat, transforming Capcom’s classic Mega Man X run-and-gun formula into a delightfully replayable procedurally generated platform rogue-like.

Although its procedural algorithm, which constructs stages out of pre-designed level chunks, could be a bit hit and miss, its tight platforming action (featuring a choice of two distinct heroes), entertaining bosses, and a wide array of abilities to keep each run fresh helped make it easy to overlook the occasional wobble – and it even managed to pack in optional co-op play for some added amusement.