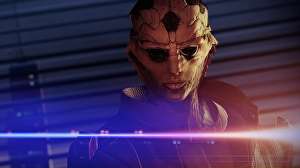 Mass Effect’s back. The Legendary Edition of BioWare’s beloved trilogy launches on 14th May and Shepard’s aging space adventures have never looked better. We have plenty of detail on all the upgrades this remaster brings to Mass Effect 1, 2 and 3 below.

But, of course, there’s more to this impending revival than all that. Sitting down with BioWare to discuss the changes and look to the future, the fact Mass Effect is back on the schedule at all seems like something worth celebrating, considering where the franchise seemed to have been left a few years ago. For fans, there’s been an anxious wait for news on whether Mass Effect would continue, until the twin announcements late last year – of the remastered trilogy and a brand new (still very far-off) continuation of the series – let fans once again breathe easy. We talk to BioWare about all that below as well.

First, some specifics. The Mass Effect trilogy’s Legendary Edition includes 4K support and HDR compatibility, plus 60 FPS on PC and consoles from PS4 Pro/Xbox One Series X forwards. On PC, it adds support for controllers and 21:9 widescreen displays. As expected, all three games and all single-player DLCs are included. There’s no multiplayer mode, no additional story elements, and no version (yet) for Nintendo Switch.