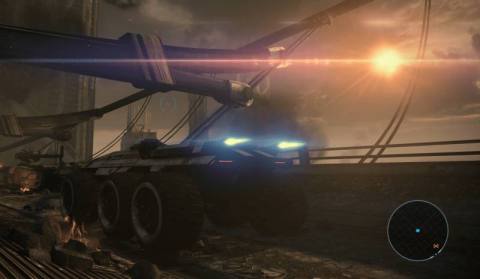 Ah, the Mako. Many Mass Effect fans love it and just as many loathe it. I myself have a love/hate relationship with the rugged terrain vehicle, which is why when we spoke with BioWare as part of our cover story one of the first questions we asked was “What did you do to the Mako?” For those curious about testing those awful driving skills once more, here is the Mass Effect Legendary Edition Mako changes you can expect when the remaster drops later this May.

While the bulk of mechanics remain unaffected in the trilogy in an effort to keep the experience “organic,” a few quality of life improvements were a priority. With HUD adjustments and smoother shooting mechanics in the first game, the Mako changes are among a few adjustments made to make the first game even better.

When driving the Mako in the first game, a feeling of chaos is definitely felt. Crash-landing on various worlds only to spin out of control into a pool of lava isn’t the standard definition of fun, but that doesn’t take away from the other in-air moments that felt nothing short of exhilarating. So what’s changed?

The original Mako design made the vehicle move at almost a snail’s pace. While a speed variety was there, it varied between “Oh my GOD, drive faster” to “TOO FAST, TOO FAST.” With the Legendary Edition, BioWare felt it was important to make small changes to how the vehicle operates, making it slightly more realistic in terms of a solid driving experience.

Smoother camera operations when driving and citing down the barrel for assault, updated physics to make the Mako feel more weighted and the player in more control, and better aiming for the actual weaponry are among the tweaks made. The studio also offered an alternative control scheme so that players can move even more seamlessly between the camera-centric controls and the Mako-centric controls.

With the updates made to the entire base of the world in the first game, including full-level relighting and special VFX, exploring in the Mako looks like it will actually be fun for those that loathed the cart of terror. Better handling and target acquisition makes it a little smoother without completely changing what made the Mako what it was: a staple to a beloved trilogy.

“The footprints of every level are quite large, but they’re also somewhat sparse,” director Mac Walters explains to us when talking about the environmental changes that Mako lovers can explore. “Part of that was the beauty of it – going out and finding these locations that had that sort of stark beauty to them. But at the same time, you couldn’t also help but feel like they could be a little bit more fleshed out.”

To learn more about the upcoming remaster, be sure to check out our game hub here with exclusive looks inside of the Mass Effect Legendary Edition all month! Video, interviews, and so much more on the way to celebrate our newly revealed cover that features three variants to enjoy!