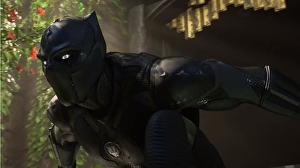 The addition of Black Panther as a DLC character to the game, delayed last year due to the sad passing of actor Chadwick Boseman, arrives as part of the War for Wakanda expansion.

In the brief trailer, below, we hear the leader of A.I.M. talking with Black Panther villain Klaw. It sounds like an invasion of Wakanda is on the cards.