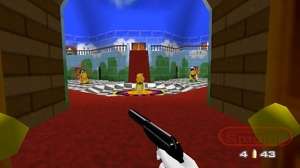 Ever wondered what Peach’s Castle from Mario 64 would look like as a GoldenEye level? Of course there’s a mod for that.

GoldenEye With Mario Characters is the work of modder StupidMarioBros1Fan. The mod launched in January 2018, and to mark its three year anniversary, StupidMarioBros1Fan released a big update that includes the Peach’s Castle level, which replaces the Egyptian level at the end of the existing mod.

The video below, from YouTube channel Graslu00, shows off gameplay of the Peach’s Castle level. It’s quite unnerving to see Mario shoot up the place with GoldenEye guns, watching the Koopas slump to the floor, dead. It’s well done, albeit a bit grim!