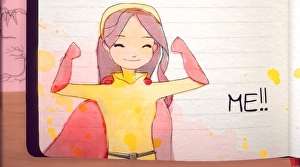 Lost Words: Beyond the Page was one of the Stadia launch titles a year ago, but its being exclusive meant – interesting though it was – it passed a lot of people by, which was a shame.

It was a shame because there’s a “potent” story about childhood there, Vikki wrote in her Lost Words review for Eurogamer. A story written by Rhianna Pratchett, about a girl whose tumultuous life unfolds in a diary as you play – playing a heroine character of her imagining in a platforming, fantasy world.

It’s a roundabout way of saying I’m glad Lost Words is now finally getting a proper release, snarky though that may sound. It’s due 6th April on PC (Steam), PlayStation 4, Xbox One and Nintendo Switch.