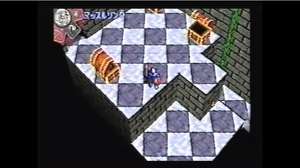 Magic Castle is an eye-catching roguelite made on the Net Yaroze platform by a handful of Japanese developers back in 1997. But it never came out – until now.

For the uninitiated, Net Yaroze was a Sony project that made available to hobbyist coders a basic version of the PlayStation dev kit for £550. Around 1000 units were sold in Europe, which effectively created a ready-made community of budding developers working independently on the PlayStation platform. (For more, check out Eurogamer’s 2013 feature, The story of Net Yaroze, Sony’s first indie push.)

A Magic Castle prototype was built using Net Yaroze, but unfortunately the game was never finished or released. In March 2020, NetYaroze-Europe.com interviewed the head creators of Magic Castle: K. Matsunami, a game designer who now works at Sega, and a game designer who goes by the name PIROWO, and in the interview Matsunami revealed Magic Castle was created in just eight months as a pitch to a game production company. Sony expressed interest, but asked the developers to work on another project at the company instead. They declined. Eventually, the team disbanded.