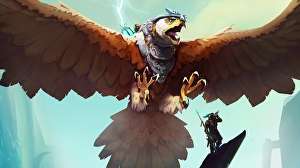 Atun’s Folly, as the update known, aims to enrich The Falconeer’s entertaining core – which plops players atop giant falcons to explore and dogfight their way across a visually sumptuous map – by introducing expanded piracy options into the world.

Players can visit the titular Atun’s Folly – a pirate settlement situated on the back of a turtle – to embark on missions that specifically boost their pirate infamy: taking down trading vessels, stealing loot, and attacking Imperial and Mancer forts.