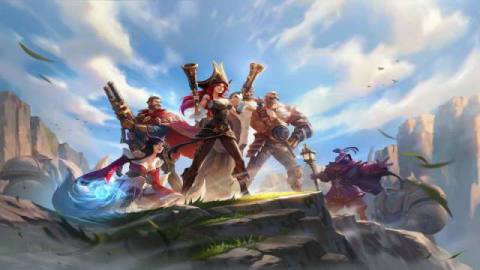 If you’ve been waiting to play League of Legends on a mobile device, today’s your day, as League of Legends: Wild Rift comes to open beta on both iOS and Android. While many players are still eagerly awaiting Wild Rift’s console debut, it looks like they will still have to wait a bit. In the meantime, Wild Rift is here!

Wild Rift games are much faster than their traditional PC League of Legends counterparts, but attempt to capture the style and skills of the characters and gameplay in a digestible, quick format. If you already play League and enjoy the hell out of it, I can’t say that you’re probably going to want to switch. But if you’re constantly pressed for gaming time and want to knock out a match in 15 to 20 minutes with smooth gameplay and solid flavor, League’s essence does drizzle down into its mobile incarnation. Personally, I find playing anything more than a few minutes on my phone a battery-burning chore that I’d rather be at my PC for, but I can’t dismiss the large segment of players that might be looking for exactly this experience. For players who are not familiar with League, Wild Rift does a lot to streamline various game components like which items to buy at all moments of the game.

Over the next few months, players can engage in a variety of activities as well as traditional 5v5 Wild Rift play as they unlock characters and skins. Of note is “ARAM” mode, or all-random, all-mid, a casual mode that’s a blast on PC and lets you shut your brain off almost entirely and just press your buttons. All players are forced into the middle of a single-lane fray so there’s really no jungles to worry about or players sneaking about, everyone is in the action at all times, trying to execute that one big game teamplay moment. Maybe you’ll get a chance to discover a hero you really like this way. It does happen! ARAM matches begin starting April 5.

Players can participate in ranked, move along the battle pass, and hit up the launch events to unlock characters quickly. After playing a bit in the early access phase, I think I’m still going to stick to playing League on PC, but I think a lot of lapsed players or those looking to play a game while they eat lunch with a sandwich in hand might enjoy what Wild Rift has to offer. There’s only one way to know for sure, and that’s to download it and check it out. I’ll say this, the animations and character splashes are really awesome on Wild Rift, as someone who generally only engages with this cast in Legends of Runeterra and occasionally Teamfight Tactics.

Are you interested in trying out Wild Rift? Why or why not? Do you play League of Legends? Did you ever? Do you play MOBAs at all? Let us know in the comments!