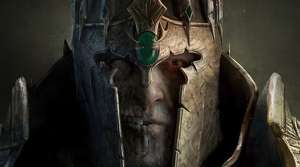 I really want to like King Arthur: A Knight’s Tale, but I find the experience of playing the Steam Early Access release so trudging as to almost be a chore. It’s a shame, because there’s promise in a lot of the features, and I’m very much on board with the idea of being Mordred, who’s usually the villain, chasing down Arthur, who’s usually the hero. We’re all brought back from the dead – magical stuff: don’t ask – and because of it, everything is cast in a graveyard hue, all grey and misty, moody and murky. But what it forgets along the way, or what it doesn’t have yet – because I have to remind myself this is early access and there’s plenty of time for things to change – is life.

It lacks energy, that kind of snappiness and charisma the best turn-based games have. Games like XCOM, games like Divinity: Original Sin 2, which, given King Arthur has RPG exploration and dialogue, seems an apt comparison. And it suffers all over because of it.

When you’re in the RPG layer, wandering around environments, it’s slow. And it feels empty, devoid of life in the surroundings, devoid of music or companion banter, devoid, really, of anything much to do. You can loot a body, loot a chest, maybe do a very simple sidequest for a very wooden NPC, but that’s it. All there really is to do is fight.