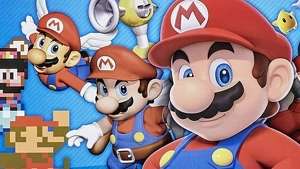 Hang on, is Super Mario 64’s movement still the best in gaming?

Load up the game and you’re dropped back at Peach’s Castle entrance, with the shush of that distant waterfall. The flitter of birds between trees. That green hillock and that blue sky and a specific, familiar sense of calm. Then you wind up your first triple jump – wah! HOOHoo! – and release it – YAhoo! And now it’s all 😮 and mouth agape and I seriously think this one move alone might be the best, most rewarding thing in my Switch library. The best thing in gaming? Certainly the best thing you can do with a bipedal avatar and a pad in hand, as Mario shoots so high and so fast the camera cranes to keep up. Then he spins and tucks – arms out, arms in, too quick to count – cleaving the air with the sound of two swooshes before landing with a gymnast finish. With triumph and joy. Of course. Super Mario 64. Still perfectly animated and weighted and timed and you’ve not even tried the Long Jump yet. You’ve not even heard the Dire Dire Docks theme yet! What are other games even for?

I think many players have worked through the 3D All-Stars Collection one game at a time. But I’ve been enjoying a four-course – I include Odyssey – game of Uber-Mario: yes please all served at once, thank you. Like Triple Jump Tapas! Flicking between games, their differences clearer in relief. And played like this they alter each other a little, like album tracks in sequence. And pound for pound and jump for jump, to me 64 still feels like the G.O.A.T.