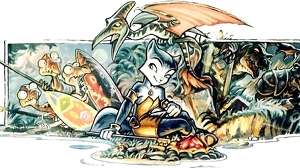 Rewind to the turn of the century – the next generation of console gaming was in its infancy with the arrival of Sega Dreamcast and the promise of PlayStation 2, but Rare was busy finishing up its latest Nintendo 64 projects. Perfect Dark was set to arrive that summer after multiple delays, Conker’s Bad Fur Day would arrive the following year, but it was Dinosaur Planet that would perhaps be the most exciting title of the lot.

Magazine articles teased a multi-character, Zelda-style action adventure set in a beautiful dino-inhabited world. It was shaping up to become one of the largest games Rare had ever produced but before it reached the finish line, the game was cancelled and development shifted to the Nintendo GameCube, where it became Star Fox Adventures. Dinosaur Planet became a ‘lost’ game then, never properly seen outside of Nintendo until recently, when a surprisingly complete build salvaged from development hardware appeared.

In the new episode of DF Retro embedded below, I take a look at the recovered code in depth, see how many of its ideas, levels and art transitioned across to Star Fox Adventures and we also talk to one of the people who actually made it. In the process, we’ll also re-assess Star Fox Adventures itself – a game that didn’t receive the many accolades traditionally bestowed upon Nintendo first party output, but a title that’s clearly one of the most technologically advanced games on the platform. Thanks to the arrival of the lost N64 code, we can now more readily appreciate its achievements, along with the level of work required to take the original game concept and move it on to the new hardware.