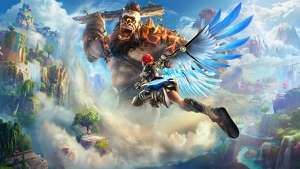 The cubes are probably my favourite thing about Immortals Fenyx Rising. The floating cubes. Huge cubes, taller than me, scattered nursery toys of the Gods. You whack them to start them up and then they glow and hover above the ground. In this state you can pull them about and even throw them. You can stack them and use them for all kinds of platforming puzzles. Clever stuff, inevitably. What I love though – and I think I do love the cubes a bit – is their playfulness. Prod them and they drift a little. Lob them at a target and they spin away afterwards with a sort of Space Odyssey laziness. Once I was standing on a cube and I got another one stuck underneath it, which meant the cube I was standing on started to tilt and threatened to throw me off. Immortals is always a lively game, but the cubes seem to really bring it to actual life. You sit up. There’s a bit of mischief in them. A sense of surprise that is sometimes missing from the wider experience.

Immortals Fenyx Rising used to be called Gods and Monsters. It’s an open-world action-adventure set amongst the Greek myths. You play as Fenyx, a demi-god who has washed up on the Golden Isle just as the monster Typhon has arrived to get revenge on the gods for his banishment. All fine. It’s a game about hitting enemies with a sword and an axe, and gadding about from on high with wings made for you by Daedalus himself, before engaging in a little puzzling.

The tone is cartoonishly light-hearted but – these are Greek myths after all – too bawdy for kids, which is a bit of a shame as they seem like the prime audience for this sort of gentle blend of activities. The game’s most famous, perhaps, for having pinched The Legend of Zelda: Breath of the Wild’s art style – the dozy hills, the waving grass, the craggy spires in the distance – along with a bunch of its main ideas. You can climb any surface here, just like Breath of the Wild. There is a stamina meter that works in a familiar way. You can lift giant objects and the visuals for this feat are very similar to the visuals in Breath of the Wild. You can ride wild animals once you’ve tamed them. You can glide on those wings of yours. There are dozens of little puzzle chambers dotted around the open world. I could probably go on.