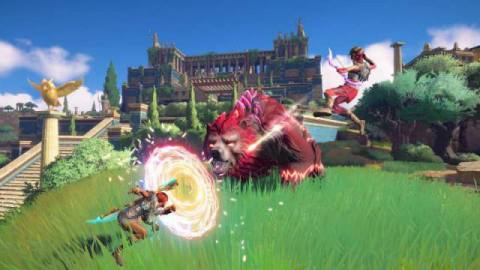 When a powerful titan defeats the Greek gods and scatters them across the Golden Isle, an unproven shield-bearer named Fenyx washes up on shore. More of a storyteller than a soldier, Fenyx must now write a legend of their own, reuniting the gods and challenging the evil force known as Typhon in an ultimate underdog story. Much like its protagonist, Immortals Fenyx Rising strives to be more than a game that just repeats the glories of others; it adds its own mythical flair on top of developer Ubisoft Quebec’s previous work on Assassin’s Creed Odyssey. The result is an exciting and unique open-world adventure worthy of a place in the gaming pantheon.

Exploring the Golden Isle is a joyous experience. Rich visuals (inspired by Studio Ghibli’s films) create lush and diverse biomes, and your traversal abilities make it simple to navigate the world. Fenyx (who can be male or female) can climb nearly any surface as long as they have the stamina, or jump off a mountain or statue and glide across long distances with ease. Even when I had fast-travel options to reach my destination quicker, I typically opted to make the journey manually. Every corner I turned or nook I explored rewarded me with puzzles to solve or enemies to battle for gear, resources, and other rewards.

As Fenyx progresses, Immortals fulfills a terrific power fantasy. At first, the combat system emphasizes basic attacks, parries, and dodges, but that run-of-the-mill repertoire quickly builds to one that allows you to chain together awesome, godlike powers. You can command your bird companion to rain death from above while you summon a cluster of spears from beneath the ground, then finish the combo with a devastating swing of a giant hammer. Immortals consistently delivers stylish action that encourages you to build your combos and optimize your gear to suit your playstyle. Unfortunately, the enemy types get repetitive; by the end of the journey, I was tired of battling the usual cyclopes and griffins, which is why I actively sought out the unique optional bosses.

When I wanted a tough fight, I took on the corrupted forms of legendary heroes like Achilles and Odysseus, or tracked down Mythical forms of monsters like Medusa or Ozomene. Though you grow rapidly in power as you continue Fenyx’s adventure, these optional fights provide distinct, edge-of-your-seat battles that test your skills and strategy – and reward you with unique gear.

Outside of the challenging fights, my favorite tasks to undertake in Immortals are the often-outstanding Vaults of Tartaros. Much like the Shrines in the Legend of Zelda: Breath of the Wild, these large, themed rooms throw distinct puzzles your way, with a different tactic required for each one. I enjoyed the innovative ways Immortals forced me to wrack my brain. One tasked me with activating gusts of wind to blow over obstacles, while another had me figuring out how to move boxes to pressure switches without getting destroyed by lasers. These Vaults feature such careful and intentional design that I always appreciated how clever the solutions were when I finally saw the big picture. Standard Vaults are often short and sweet, but God Vaults, which usually take place at the end of main storylines, are long, involved rooms that can take up to an hour to complete. Not only did I love working through these longer Vaults, but they serve as the perfect way to put a bow on the story arcs featuring some of Greek mythology’s most iconic characters, as voice lines play as you progress through the Vault, giving additional insight into the true nature and motivations of that god.

With a narrative that involves a world-reshaping beast alongside the mightiest warriors, gods, and monsters of Greek mythology, you may think Immortals Fenyx Rising takes itself seriously. However, its high stakes and dark premise are punctuated by comedy, providing a lighthearted tone full of endearing moments with many of its characters. While the jokes don’t always land, I appreciated the strong mix of sarcasm, self-deprecation, and fourth-wall breaking. While an out-of-nowhere joke has the potential to take you out of the action-packed story, the writing is done in a masterful way that keeps the tone consistent throughout, making neither the serious moments or the comedic ones feel out of place.

Immortals contains all the ingredients I want from an epic, open-world adventure steeped in mythology. With empowering combat, rewarding exploration, and a story that shines a spotlight on its characters through humor, Immortals Fenyx Rising leverages its myriad inspirations to discover its own identity and deliver an outstanding open-world experience. 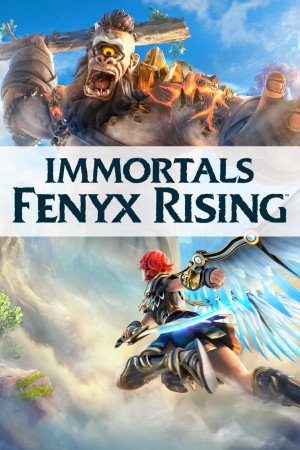 Summary: Immortals Fenyx Rising draws inspiration from movies and other games to create a unique and exciting mythological journey worth embarking on.

Concept: A humorous, action-packed adventure in which players explore a massive island brimming with prominent figures and creatures of Greek mythology

Graphics: The characters may look like strange puppets, but the world they populate is utterly gorgeous

Sound: An appropriately heroic score accompanies your feats, and the funny narration (by Zeus and Prometheus) hits the mark more than it misses

Playability: Though some of the environmental puzzles are poorly executed, the challenge-room Vaults are often clever, creative, and fun