As the saying goes, there’s no smoke without fire. When it comes to a new model of Nintendo Switch, there’s a whole lot of smoke – and Nintendo’s past form seems to dictate that now, four years in, we’re rapidly approaching the time when we’re due a new, more powerful revision of the Switch. We got the smaller one in the Switch Lite; it does feel like the time is approaching for the big boy upgrade. Switch Pro? Super Switch?

Whatever the name, the rumors and reports continue to flow in. The latest from Bloomberg has one detail that should pique your interest: the mention of this new model of Switch being compatible with DLSS.

Bloomberg’s insiders also peg the machine as having a new OLED display, a better CPU, and more memory – all good things that’ll help rejuvenate a machine that was, let’s be honest, fairly underpowered even at launch. But DLSS is the real potential game-changer here.

It’s something that’s been speculated about before in detail, like in the Digital Foundry video above, and the tech nerd in me is already absolutely pumped at the concept of this feature making its way to the Switch. Why? Well, to understand that you need to understand…

DLSS is an acronym that stands for Deep Learning Super Sampling, and is a technology Nvidia has developed and deployed alongside its most recent PC graphics cards. It started out on the 20-series cards like the RTX 2080 Ti, but remains vital to the performance of the latest models like the RTX 3080, 3070, and 3060ti.

At a basic level, DLSS uses artificial intelligence (thus the ‘Deep Learning’) in order to render higher detail graphics at a lower cost to the actual hardware in question. It does this by rendering a lower-resolution image to begin with, but then lets the AI upscale the image, filling in the detail lost by rendering at a lower resolution (thus ‘Super Sampling’).

The use of artificial intelligence for improving image quality has been talked about a lot in video games in recent years. Fans have used similar techniques to upscale and create high-resolution versions of the pixelated pre-rendered backgrounds of the PS1 Final Fantasy games, for instance. But so far, DLSS has played its most significant role in ensuring ray tracing can actually work.

While I’d be amazed to see any Switch revision embrace it, ray tracing is an easy way to understand how powerful DLSS can be. Ray tracing is an awesome feature and a major new-generation buzz word, but even with dedicated hardware such a real-time lighting solution absolutely tanks performance. In some games, I’ve seen performance halved. By using DLSS, you can enjoy many PC games with ray tracing, at 4K resolution, and 60fps. The catch is that it isn’t really 4K resolution; more like the game is running at something like 1440p and is being upscaled, which in turn balances out the real time lighting power drain.

The truth is that when it’s implemented and executed well, DLSS is so good that it’s very, very difficult to discern differences between a DLSS upscaled 4K and an actual native 4K so long as the lower-resolution source is sufficient. To really tell the difference you’ll need to be some sort of massive graphics savant or have to freeze frame and break out the magnifying glass.

Indeed, in some games DLSS has actually provided more detail, with the AI managing to fill in additional details that weren’t quite visible when rendered natively. DLSS has become a must on PC for playing ray traced games with a stable frame rate – it’s incredible technology. Developers have to put in some work to integrate DLSS, but it is something increasingly embraced, as shown by the huge number of games using it on PC. One has to imagine that if it becomes a key feature of a piece of Nintendo hardware, most games going forward will support it. 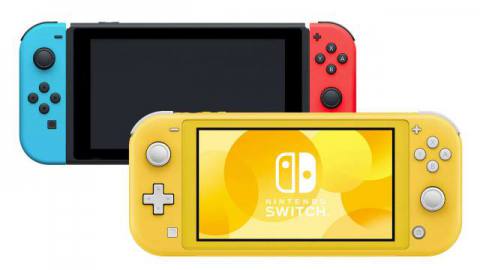 What DLSS could mean for Switch Pro

DLSS is one of those technologies that, when working, feels pretty much indistinguishable from magic. Like, your hardware is the same, but you flick it on and suddenly the game performs way better while looking the same – or even better. It melts the mind.

Stop a moment now and consider what DLSS could do for the Nintendo Switch. This is a machine where games are often rendered at sub-HD resolutions, but then docked and thrown up on 4K displays. A common thread in Switch games is that there’s always a trade-off; they look better on handheld, helped by the small screen, but play better when docked, as the machine ramps up to use more power.

The report already talks about using the Switch to create 4K images, but I’m excited for even the results below that. This new model will allegedly have a 720p screen, but that would still allow games that render at 540p to benefit. I think back to Breath of the Wild, which ran at a relatively solid 30fps frame rate but used some pretty aggressive dynamic resolution scaling to achieve it. While techniques like scaling wouldn’t be completely eliminated by DLSS, the scaling work the AI would do at the end before you see the final image would shave off the rough edges created by this sort of technique. Then, yes, there is the potential for Switch games to be upscaled to 4K via DLSS.

This isn’t going to make Switch games look like PS5 games, but the results would be impressive. Many of Nintendo’s most bright and colorful games would probably benefit most – I bet Mario games, which always upscale well, will look bonkers.

DLSS is not perfect, and demonstrations of its use on PC can sometimes show it struggling in specific areas (like correctly upscaling the minute detail in hair, for instance), but one other advantage is that it is a software-bound solution. So long as the graphics chip in question is compatible, DLSS can be upgraded. Indeed, we saw a huge leap forward last year with DLSS 2.0, and as a staple feature of Nvidia’s newest graphics cards, this will presumably continue.

Anyway, the performance boon DLSS can offer is impressive. For example, take Death Stranding’s PC version: on the weakest of Nvidia’s DLSS-driven 20-series GPUs, that game could run at just over 30fps at 4K by default. Flick DLSS on and the frame rate jumps to between 50 and 65 frames per second, depending on if you’re in the game’s quality or performance modes. That’s an almost 50% performance boost in the lower scenario – and an almost 100% boost in the upper bounds. Those are game-changing numbers.

DLSS might sound like a buzz word, and to a degree it is – but make no mistake that the performance gains it can offer could be earth-shakingly important for Nintendo Switch games, at least to hardcore players. If it really is included, that alone is enough to make me say I’ll be there for this new revision on day one.

The post If the new Nintendo Switch really supports DLSS, it could be a game changer appeared first on VG247.