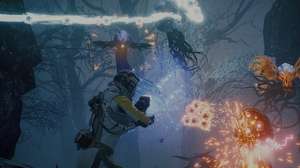 Developer Housemarque, known for the celebrated likes of Resogun and Nex Machina, has shared new details of its upcoming PS5-exclusive sci-fi shooter Returnal, this time focussing on the looping structure and combat driving the game’s moody, rogue-like action.

Returnal sees Housemarque moving away from the small but perfectly formed arcade experiences that have earned the studio huge acclaim over the years, and instead opts for something a little more blockbuster in outlook. The end result, which follows space scout protagonist Selene as she attempts to escape a hellish loop of endless resurrection while stranded on a deadly planet at the edge of the galaxy, blends third-person action and platform elements with a strong focus on narrative.

It’s not been entirely clear how Returnal’s rogue-like looping premise would work in practice based on previous showings of the game, but now, writing in a PlayStation Blog post, Housemarque has explained that Selene will be send back to the start of the time loop on every death – moments before crashing down onto the planet – at which point she’ll lose most abilities and items collected on the previous cycle.