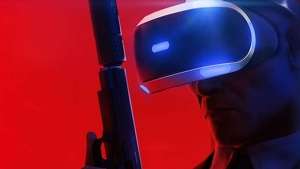 Alongside today’s release of Hitman 3 is a welcome bonus – a mode that allows you to play through the entirety of IO’s World of Assassination trilogy in virtual reality. That it works at all is a wonder, but there are a handful of caveats along the way, so here I’ll run through what’s good, what’s not so good and whether it’s worth investing for the VR experience alone.

If you didn’t already know, Hitman VR is currently an exclusive for PSVR on PS4 (a timed exclusive, it would seem, though we don’t know when exactly other headsets will be supported). If you own any of the Hitman trilogy games on PS5, you will only be able to play them in VR if you download and run the PS4 version of the game. And, if you are playing on PS5, you will need the PS5 PSVR adapter in order to get your headset working on that console. It’s a faff, but you can claim the adapter for free from Sony – although it typically takes a couple of weeks to arrive.

So how good does Hitman look in VR, considering it’s essentially a last gen build running on what amounts to be the lowest resolution VR headset on the market? Well, it’s a mixed bag. Take the glittering Dubai level, which when played in VR is devoid of any reflections. This is one of many corners that have been cut to make Hitman work in VR and while it doesn’t affect the gameplay in any way, it does diminish the sense of presence. Draw distance also takes a big hit, meaning you’ll spot a lot of pop-in on distant objects and, most jarringly of all, crowds. Once you’re in a crowd, though, things are great. On the Berlin dance floor, there’s a surprisingly large amount of NPCs in play, but on the approach most rooms are fairly empty until the NPCS suddenly ping into existence. This happens more frequently if you’re rushing through a level, but taking things at a slower pace helps minimise the problem.