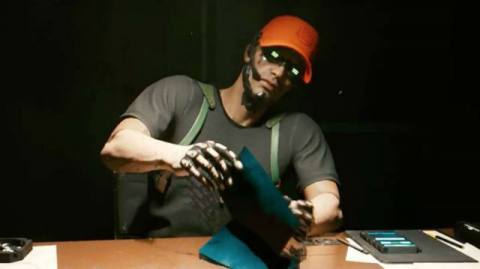 Hot on the tail of last week’s first look at Cyberpunk 2077 running on consoles, courtesy of Xbox One X and Xbox Series X, developer CD Projekt has released a second helping of console gameplay, this time focusing on PS4 Pro and PlayStation 5, via backward compatibility.

This time, CD Projekt has opted to showcase a section of gameplay from right at the start of the adventure, offering a look at the opening of the Nomad Lifepath, one three Lifepath options (alongside Streetkid and Corpo) available in-game. Notably, some of this footage was leaked online over the weekend, but it’s much better served by this official gameplay capture.

It begins with a relatively brisk glimpse of Cyberpunk 2077’s character creator (remaining strictly PG and firmly above the collarbone for this PlayStation showing) before things get properly underway with a quick vehicular tour of Night City via PlayStation 4 Pro.

From there, it’s onto some first-person car tinkering and conversation out in the Badlands beyond Night City’s perimeter, and then, after a bit of a detour, the action skips to the city itself, for some first-person driving and sightseeing that eventually culminates in a gun-toting car chase through the rain-drenched streets.

All in all, it’s a considerably more engaging selection of footage compared to last week’s rather stately meandering through Night City, which offered plenty of opportunity to admire CD Projekt’s environmental work but not much else.

Of course, it’s disappointing CD Projekt still isn’t showing Cyberpunk 2077 running on either the base PlayStation 4 or Xbox One – particularly given development for the machines is said to have contributed to Cyberpunk 2077’s most recent delay – but there’s no denying that it’s a looker on PlayStation, and that’s even without the full next-gen update, which is coming to PS5 and Xbox Series X some time next year.

Expect the reveals to continue as CD Projekt ramps up for Cyberpunk 2077’s release on Xbox, PlayStation, and PC in less than three weeks time, on 10th December.