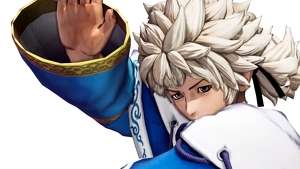 The video below is much better than last week’s Shun’ei gameplay, which was so packed with jump cuts it was hard to get a good idea of how the character works.

The Meitenkun gameplay, however, gives us a decent look at his moveset and combos. As in King of Fighters 14, Meitenkun is a sleepy young fighter who always holds a pillow. He’s sort of like a drunken master archetype – except instead of being pissed, Meitenkun is just knackered.