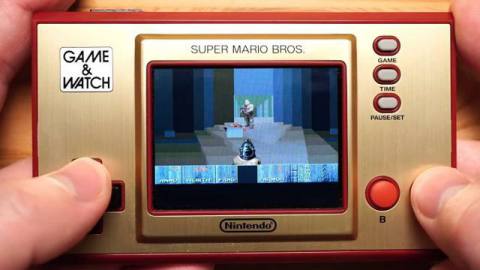 For some reason people seem hell-bent on porting Doom to every device on the planet – there’s even a Tumblr blog dedicated to keeping up with this obsession – and the latest to get the Doom treatment is the Nintendo Game & Watch. Or its re-release version, at least.

The original Game & Watch was first released in Japan in 1980, introducing the d-pad controller and providing Nintendo with its first big commercial success. Nintendo recently re-released the handheld to celebrate Mario’s 35th anniversary, and the new hardware has allowed hackers to mess around with the tech and port more games to the device.

YouTuber stacksmashing managed to get Doom running, but not without some serious compromises: he had to remove lots of textures, disable the sound, and slightly reduce the screen resolution (thanks, Kotaku). Despite all this, the game is playable, as you can see in the video below:

The video provides a fairly in-depth explanation of how this was achieved, and stacksmashing says he will release a follow-up going into further detail, but for now you can find another video explaining how the re-released Game & Watch was initially hacked – one day before it had even officially released. Worth a watch.