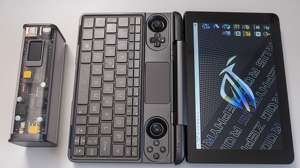 I’ve been lucky enough to test out a bunch of weird and wonderful tech, but I don’t always get a chance to share my discoveries in a full review or roundup. That’s why this column exists, to highlight bits of tech that might not fit elsewhere but nonetheless deserve a mention. Enjoy!

2020 was a year of dashed plans and weird events, but it was also one that was full of cool, novel and genuinely exciting pieces of technology. We’ve covered some of it here on Eurogamer and on the Digital Foundry YouTube channel, but there were also a fair few items that fell through the cracks, especially as the Digital Foundry Deals project took off and next-gen consoles arrived. This week, we’re redressing some of these omissions with three of the coolest tech projects I tested in 2020 – from a miniaturised gaming laptop to a retro-future power bank and one of my biggest tech disappointments of the year. Let’s get started.

The GPD Win Max is the whole reason that kicked off this column in the first place – I wanted to share the twisted genius that is an eight-inch laptop with an integrated gamepad built-in just above the keyboard. There’s even a 10th-gen Intel Core i5 processor and a full Windows 10 install here; this is a legitimate machine with specs that outperform most office laptops. Of course, you’re probably not going to be editing spreadsheets on this thing; as the legendary Chad Warden said, we ain’t doin’ geometry, we’re trying to play some games.