The giveaways keep on coming! Today we have for you No Straight Roads CE that is currently sold out in North America! 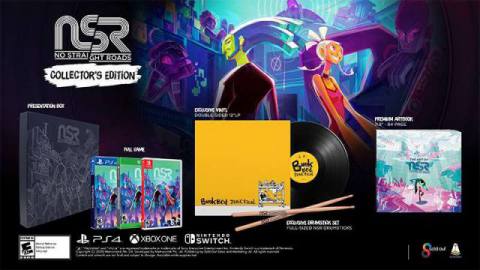 From the publisher
Take back Vinyl City – with rock! Embark on a music-based action-adventure as indie rock band members Mayday & Zuke and lead a musical revolution against EDM empire No Straight Roads. After being unfairly rejected in their audition to join No Straight Roads, Mayday & Zuke uncover the evil intentions behind the NSR empire. It’s now down to them to save their city from corruption. Enjoy frenetic combat with a musical twist as these two aspiring rock artists fight back with the power of music!

We have 2 copies of the collectors edition available for each platform – Xbox One, Playstation 4 and Switch for a total of six copies! Please note these will be PEGI labeled and not ESRB but since consoles are region free they will play perfectly on US consoles. No Straight Roads is rated E10+ but parents will be required to accept prize. We are only able to ship to continental US, sorry! You may enter once a day below and let us know what platform you would like. Typing in “any”  is an option if you do not have a preference for console. Full rules available with each entry method below. Entries will be accepted until 12/4/2020. Good luck!