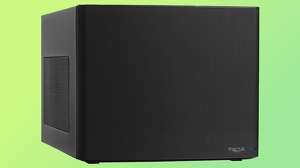 With Ryzen 5000 processors and RTX 30-series graphics cards extremely hard to come by right now, thanks to minimal supply and an incredible amount of demand, turning to a pre-built PC is becoming one of the only ways to get your hands on the latest hardware at a (somewhat) reasonable price. After all, retailers make money on each component, so selling a whole PC provides better margins than selling a single CPU or GPU.

One option from Scan and Nvidia is a small form factor (SFF) gaming PC currently retailing for £1099, which includes an RTX 3060 Ti graphics card and an AMD Ryzen 5 5600X processor. That spec should provide very competitive frame-rates at 1080p and 1440p, so it could be worth considering if you’re interested in making a substantial upgrade over your existing gaming PC or if you’re getting into PC gaming for the first time.

Behind the headlining CPU and GPU, the rest of the specs are reasonable too. 16GB of dual-channel 3200MHz DDR4 RAM is the current price/performance sweet spot, especially for AMD Ryzen processors, and a 1TB Intel 665p NVMe SSD should provide a good amount of fast storage. The motherboard is one of the most full-featured and best-reviewed A520 board on the market, the AsRock A520M ITX, so you get compatibility with new Ryzen processors, Wi-Fi and RAM overclocking. The only thing you’re really missing out on here with the budget A520 chipset compared to more expensive B550 and X570 is PCIe 4.0 support, which only makes a fractional difference to graphics performance and game load times right now.