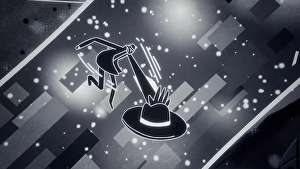 In one scene in Genesis Noir, I’m sticking my virtual hands into the prehistoric ocean to create the first life forms out of parts that look like a child’s building blocks. It’s basically creationist Lego. I need to build molecules in a way that allows them to reach other molecules out there in the soup and mate with them, and tadah! – I’ve just spurred on abiogenesis, the origin of life. Before playing Genesis Noir, I’d neither heard of abiogenesis nor would I have understood it as anything other than an abstract construct. Elsewhere, my character, a slouch hat-wearing watch peddler in a trench coat, is cheering on Golden Boy, a cosmic entity giving a saxophone performance.

These things don’t sound as if they go together, but I can assure you they do, and that’s the magic at the heart of Genesis Noir. It’s both a silent film in black and white, featuring dames with big hair, irresistible jazz performances in smoky clubs and, inevitably, crime, and also an illustration of the birth of our universe. To call Genesis Noir a game would likely do it a disservice, but people tend to get very cross with me if I don’t tell them exactly what kind of game they can expect, so let’s call it a point-and-click adventure. You point at things and you click, but this is a game that’s really out to discover how many different actions you can take through essentially pointing, clicking and moving your mouse around. You make planets spin. You throw galactic debris. You make sweet, sweet music.

The best way I have to describe Genesis Noir, a description officially sanctioned by its developers Feral Cat Den, is that it’s really more of a toy than a game. It never tells you what to do, and the only forms of writing you’ll find are a few lines of descriptive text for items and a very atmospheric intro to each part of your journey, which is split into different chapters. You’re completely left alone to work out how to proceed, and the fact that this is even possible with zero hand-holding feels like a substantial game design achievement to me.