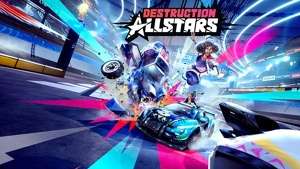 The release of Destruction All-Stars this week doesn’t just mark the next big PlayStation 5 exclusive – it’s the biggest project yet from Liverpool’s Lucid Games, and the continuation of a legacy that takes in the likes of WipEout, MotorStorm, Destruction Derby, Project Gotham Racing and so much more besides, with the studio being formed from veterans of theUK racing scene. On the eve of its release, we spoke to game director Colin Berry – who previously worked on WipEout, Sonic AllStars Racing Transformed and much more besides – and Sony xDev’s John McLaughlin about their new venture.

A lot of people get excited by the DNA of – your CV is hugely impressive, as is the rest of the teams’. How does that British racing scene DNA manifest itself in there?

Colin Berry: I mean, it’s obviously there. It’s interesting, you know, this is not just myself – there’s probably about a dozen people at Lucid who I’ve worked with it three or four different times before – there’s a good half of the staff who were either at Bizarre or Sony Liverpool or Evolution, or a mix of all three. So like you say we’ve worked on F1, WipEout, MotorStorm, Project Gotham, and I think that that helps. It certainly helped when xDev were looking for a developer to go, hey, what we’re thinking of doing something maybe with the Destruction Derby franchise in that area – which was kind of what the initial genesis of Destruction All-Stars was.