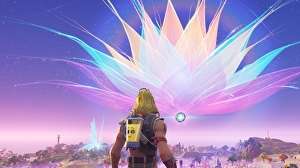 Fortnite has begun its new season with a one-off single-player sequence, Zero Crisis Finale. The 10-minute mission acts as a coda to last season’s shenanigans, as well as a leap forward in Fortnite’s storytelling ability overall.

In the past, Fortnite has nudged its plot along through season-ending live events that bring buckets of spectacle and typically doom swathes of its map. But avenues for more intricate storytelling have been limited, with players typically left as a distant audience to the events unfolding around them. More recent events have added in a smattering of dialogue and player interaction, but this has been few and far between.

All of that changes with the playable Zero Crisis Finale and its three minute introduction cinematic, below, that sets the scene: