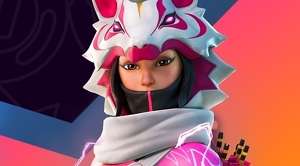 After pledging to improve the offering within its pricy £9.99-a-month Fortnite Crew subscription, Epic Games has now announced an eye-catching new skin for February and wrapped it up in the game’s ongoing lore.

February’s members-only character is Vi, a member of the Fox Clan – Fortnite’s new name for its various Kitsune mask-wearing characters such as OG season five mascot and fan-favourite Drift.

Vi’s set includes the usual character skin, back bling and pickaxe, now all with two detailed styles. There’s also a wrap (a weapon skin) and a loading screen – new items not included in previous monthly offerings.