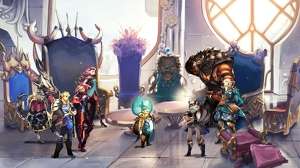 Astria Ascending casts players as one of the eight demigods – guardians of Harmony charged with protecting the world of Orcanon from the mysterious Noises.

There’s plenty more scene-setting in the trailer below – including mention of the delightfully named “Harmelon”, an instinct-suppressing melon used to maintain harmony across the land – but the gist is that it’s a side-on, turn-based RPG with some very nice hand-drawn art.