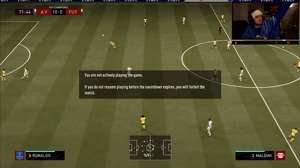 A prominent FIFA pro player has retired from competitive play after EA banned him for a “mum joke”.

25-year-old British FIFA pro Harry Hesketh was banned for February’s Europe regional qualifier event because of language he used during a Twitch broadcast on 12th December 2020 in reference to his opponent’s mother.

Hesketh made the lewd comment during a livestream after he lost heavily to 14-year-old FIFA wonderkid Anders Vejrgang during an online match.