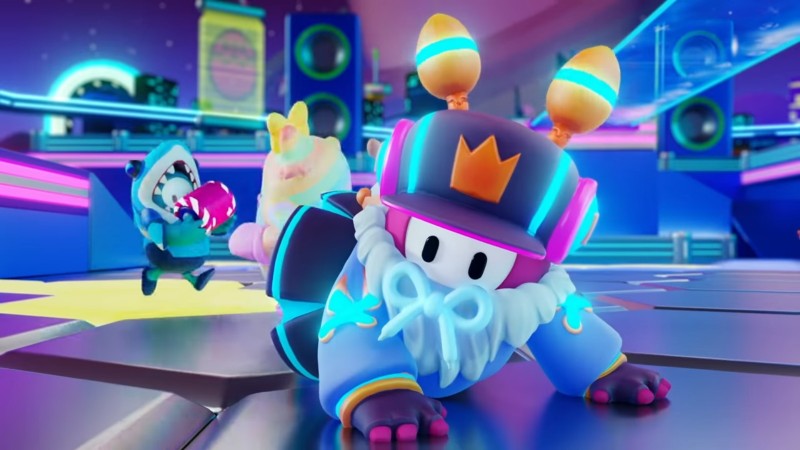 Fall Guys Season 4 takes the fun-loving jellybeans to the high-tech future on March 22 for PS4 and PC. The new season brings with it a host of new mini-games, emotes, and other neon-drenched goodies.

Season 4 sends players to the year 4041 and introduces seven new rounds filled with astronauts, aliens, as well as the mysterious “Beans In Black”. We don’t know what the new minigames will be but the cinematic trailer gives a glimpse of the challenges in store. The video also provides a tantalizing, not-so-subtle tease to a certain popular deception game some might describe as being pretty “sus”.

There’s no word on what that ending is hinting towards exactly, but Mediatonic promises to deliver more details as Season 4 approaches launch.

Fall Guys launched last August for PC and as a free PlayStation Plus game and became one of the year’s breakout multiplayer hits. The game pits up to 60 players against each other in challenges over several rounds, eliminating players until only one is left standing. It’s become popular enough to even boast various crossovers with other games, including Sonic the Hedgehog, Doom, and, most recently, Cuphead.

2021 has thus far proven to be a huge year for Fall Guys. For one, the game is spreading its wings by heading to Switch and Xbox platforms this summer. Even bigger, though, is that the game’s parent company, Tonic, was acquired by Epic Games last week. You can read about what that means for Fall Guys going forward by reading here.

How do you think Season 4 is shaping up compared to previous seasons? What do you make of that tease at the end? If you’ve fallen off of Fall Guys (pun intended), is this Season enough to lure you back? Let us know in the comments!