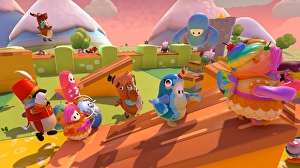 We’re just shy of seven weeks into Fall Guys’ third season – which has given the knockabout multiplayer game an appropriately wintery “icy fresh makeover” – and the time is now right for developer Mediatonic’s mid-season update, which arrives tomorrow, 2nd February.

Fall Guys’ Season 3.5 – subtitled “Stop with the yeets name it anything else just don’t include the word yeet please I’m begging you”, at the behest of the community – aims to give proceedings a bit of a shakeup at this crucial halfway juncture.

To that end, players can expect a brand-new level, 40+ variations for existing levels, and the introduction of the new Fall Feed, which offers a running display of competitor names as they’re unceremoniously eliminated from a game.