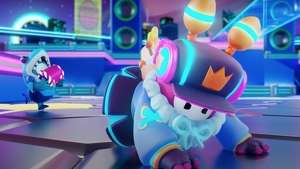 Fall Guys is going full-on retrowave for its fourth season, flinging its bean-shaped heroes to a neon-hued – and a very 80s – future when things gets underway next Monday, 22nd March.

Previous seasons of Mediatonic’s knockabout battle royale game have spruced up the bean-jostling action by introducing medieval and calendar-appropriate winter themes. Season four, however – officially known as Fall Guys 4041 – mixes things up with a throwback sci-fi aesthetic that’ll inform everything from its cosmetics to its seven new levels.