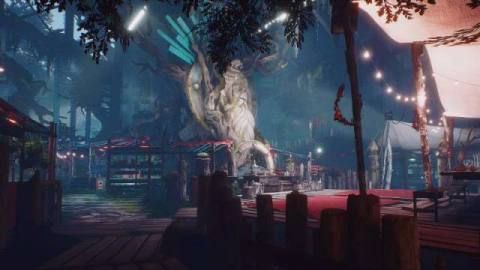 Paradise Lost offers a unique and horrific spin on World War II. Instead of raging for six years, it lasted for 20 and ended in a bloody stalemate after most of Europe was obliterated by Nazi nuclear missles. Europe is now an irradiated wasteland cut off from the rest of the world, and players assume the role of a young child trying to survive its hardships decades later. If that setup piques your interest, you’ll be happy to know that Paradise Lost is launching later this month.

On March 24, players can pick up this narrative adventure by Polish developer PolyAmorous. In 1980s Poland players control Szymon, a 12-year old orphan born and raised within this terrible version of Europe who stumbles upon an abandoned military bunker. Once inside, he’s contacted by a mysterious girl named Ewa who acts as a guide of sorts, but players will have to experience the game themselves to learn what her true intentions are. There’s also a grander mystery surrounding the bunker itself and the fate of its former inhabitants.

According to PolyAmorous, Paradise Lost blends elements of Slavic mythology with retro-futuristic technology. Players will explore the massive and highly detailed bunker, uncovering clues about the civilians and soldiers it once housed while finding keys to unlock inaccessible areas. It’s unclear how much combat, if any, is in the game (you are just a kid after all). For an idea of what to expect, watch the 13-minute narrated gameplay walkthrough below which at least provides a sense of the game’s unsettling atmosphere.

Paradise Lost will be available on PlayStation 4, Xbox One, and PC for $14.99. If you pre-order on Xbox One, you’ll receive 20% off. Pre-ordering the PC version through GOG.com offers 34% off.

What do you think of Paradise Lost, and are you interested in giving it a shot? Let us know in the comments!