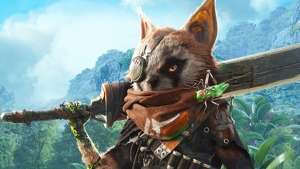 Some four years after its initial unveiling, developer Experiment 101’s much-delayed open-world action-RPG Biomutant – also described as a “post-apocalyptic kung-fu fable” – finally has a release date, and will launch for PS4, Xbox One, and PC on 25th May.

Experiment 101 was founded by former members of Just Cause developer Avalanche Studios, and Biomutant, its debut title, aims to build on the familiar open-world formula by giving players the opportunity to customise their animal protagonist with different mutations, bio-mechanical body parts, and gear – affecting the stats and abilities available as they progress across the expansive, plague-ridden landscape in a bid to save the Tree of Life.

The end result is a surprisingly vibrant sort of post-apocalypse, combining exploration (both on the ground and in the air) with heavily customisable gunplay, martial-arts-inspired combat, and a branching, mission-based narrative. At least some of that can be seen in publisher THQ Nordic’s nearly-ten-minute long gameplay trailer from last year.