Evil Genius was a cult classic for a reason – and so its sequel plays it safe to deliver a familiar but very fun belated follow-up.

The way I see it, when you’re making a sequel to something that came out a very long time ago, you can go one of two ways. On one hand, you can take the time passed as an opportunity to take that franchise off in bold new directions. On the other, you could simply bring what made the original beloved up-to-date with modern standards and conventions. Evil Genius 2 is the latter – and it’s great.

There’s nothing wrong with being an interactive, safe sequel – especially when the game you’re following up on is now well over fifteen years old. Evil Genius 2 is to its direct predecessor as Two Point Hospital is to the classic Theme Hospital – a revival that keeps everything from the original intact, with modern trappings only used to streamline and improve the experience rather than overhaul it. It wasn’t broken – so it hasn’t been fixed.

For the completely uninitiated, Evil Genius 2 is a strategy and management simulation game that places you in the shoes of the titular Evil Genius. There are four different geniuses you can choose from, but the basic concept is the same: you set about building a hidden underground lair, and from there you begin launching a campaign of evil across the globe.

The original game released in a sort of heyday of the management sim, offering similar mechanics to rivals but using its unique theme to the full. The sequel is likewise, leaning hard into the tropes of the spy fiction genre, utterly packed with references to the classic evil villains of other media – though the most obvious touchstone remains the villains of the James Bond series and the many copycats and spoofs it has inspired over the years.

There’s essentially two layers to Evil Genius: the lair and the world map. This is straight out of the original, but I’ve heard someone who hadn’t played the first Evil Genius also compare this to the duology offered in Firaxis’ modern XCOM reboots, which does sort of track. The two are very different, but feed into each other and provide the core loop of the game, which feels satisfying and engaging the majority of the time. 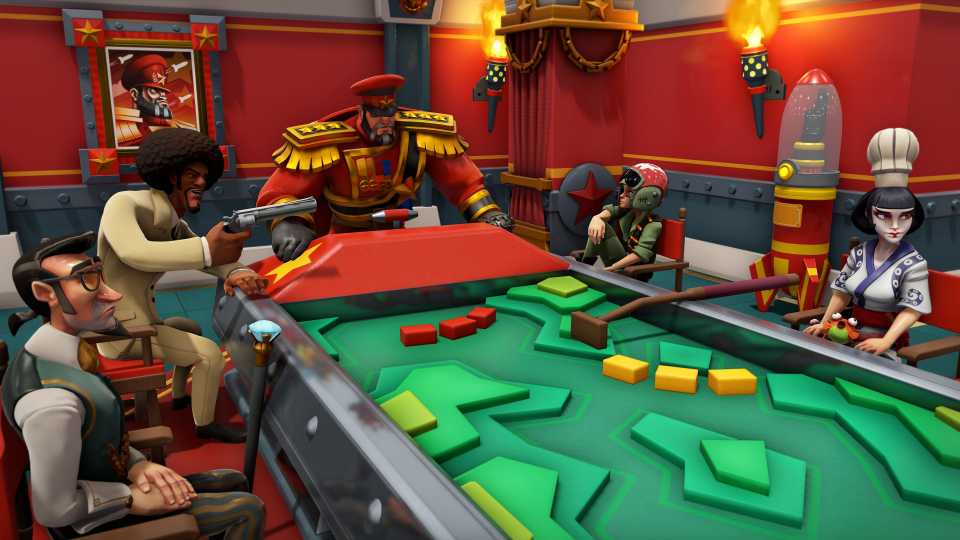 The lair is the more complex and demanding layer. Here you’ll be building the necessary rooms and equipment to maintain and grow your evil empire, but also trying to expel intruders like nosy tourists or enemy spies and saboteurs. Your options for this are great – you can build up a more elaborate casino cover operation to prevent outsiders from discovering your base at all, or you can beef up security with traps and guards. Within that, there’s a choice between lethal and non-lethal. You can choose to capture intruders so you can interrogate them for valuable intelligence or brainwash them into becoming another of your loyal minions, or you can go lethal and stack your lair up with traps like shark pits and flamethrowers to leave no trace of those intruding enemies.

All of this stuff follows on a traditional management simulation track, however, and that means you won’t have access to everything from the start, and you’ll have to make hard choices about what sort of lair you want to have. You’ll need to prioritize items for research, but also choose which sorts of minions you want to train up, ensuring you have the right amount of equipment to maintain that workforce. Almost everything you place in your lair is a drain on its power reserves, too, which means you’ll constantly need to be expanding your generators – but generators are a particularly exciting target for enemy saboteurs, who know that by shutting off the power they can disable traps and disrupt your whole operation.

As I’m sure my meandering description of all this makes clear, there’s a lot of plates spinning at once. There’s crucially not too many, though. It’s a challenge but rarely overwhelming, and that’s the recipe for a successful management strategy title.

Secondary to all of this is the World Domination stage. This is simply a stylized 3D map of the world where you can manage your evil empire. This is more indirect; your Evil Genius never leaves the lair, but instead directs things from their lavish inner sanctum – and so a map is all you see of the wider world. It’s vital to your operations, though, as you’ll be despatching minions on all sorts of diabolical deeds, from kidnapping those who can provide useful information to stealing money and cultural artifacts, which can then be plopped into your lair as loot. 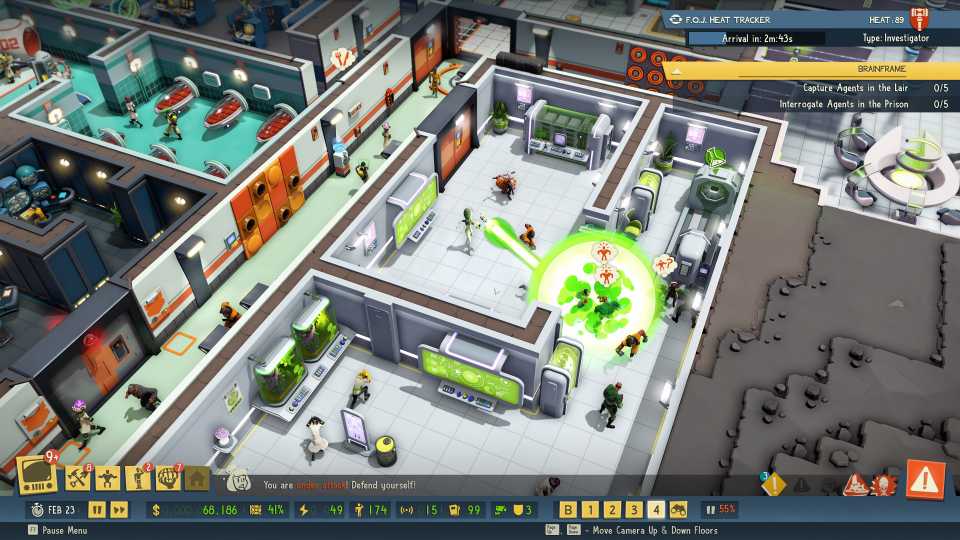 The world domination stage is a basic, simple, and even arguably a little boring piece of the Evil Genius 2 puzzle, but it’s also vital. It needs to be micromanaged to a degree – draw too much heat on yourself with too many criminal jobs and regions of the world will ‘lock down’, cutting off valuable sources of income. Attracting too much attention can also summon the Forces of Justice, who’ll then descend upon your base in an attempt to disrupt you. Every action you take has an associated cost, be that monetary, in minions you must sacrifice and then replace, or in the heat it brings on your operation. Like the base, the world map gradually builds from simple to a whole lot to manage, but it all meshes brilliantly.

There’s a good challenge, though it is a markedly less punishing game than the original. That’s not all bad, either – the original often felt unfairly difficult, with agents massively overpowered. There’s a greater sense of balance here. When you’re under the most pressure you’ll be constantly bouncing back and forth between your lair and the map with a huge to-do list in your head, sending out minions to steal extra funds before you run out of gold, and working towards your main objectives.

Speaking of objectives, that’s another way in which Evil Genius sets itself apart. These sorts of games tend to be story-light, but this series is different. Each genius has their own storyline with specific objectives, a unique super-weapon which upgrades as you progress, and a bunch of voiced dialogue to back it all up.

Objectives are completed both in the lair and on the map. You might have to capture or kill certain intruders on your island base, for instance, have your scientists research something, or perform a heist or other task on the world stage. This doesn’t just go for the main story, which progresses from one objective to the next in a strictly linear fashion, but also for the side quests and objectives, which are plentiful. At some points I had upwards of fifteen side tasks stacked up waiting for my attention – and it’s up to you if you want to engage with these or not, and to what extent.

Generally speaking you will want to get involved in many of these stories, though. The most simple ones at the very least offer powerful one-off item rewards that you can place in your lair. But the better side stories put you in contact with Henchmen and Agents, colourful characters that in turn offer up some of the most narratively rich and fun storylines in the game.

Henchmen can be recruited to join your operation, but first you’ll have to disrupt their activities as a solo crime lord out on the world map. Super Agents are the other side of the coin, of course – ridiculously powerful NPCs who can wreak havoc on your operations, including obvious Bond stand-in John Steele. There’s plenty of voiced interactions between each Evil Genius and all of these characters, and you won’t actually get to know them all. It’s impossible to recruit every single Henchman in a single play-through – which adds to the choices you’re making while spinning a whole bunch of other plates. 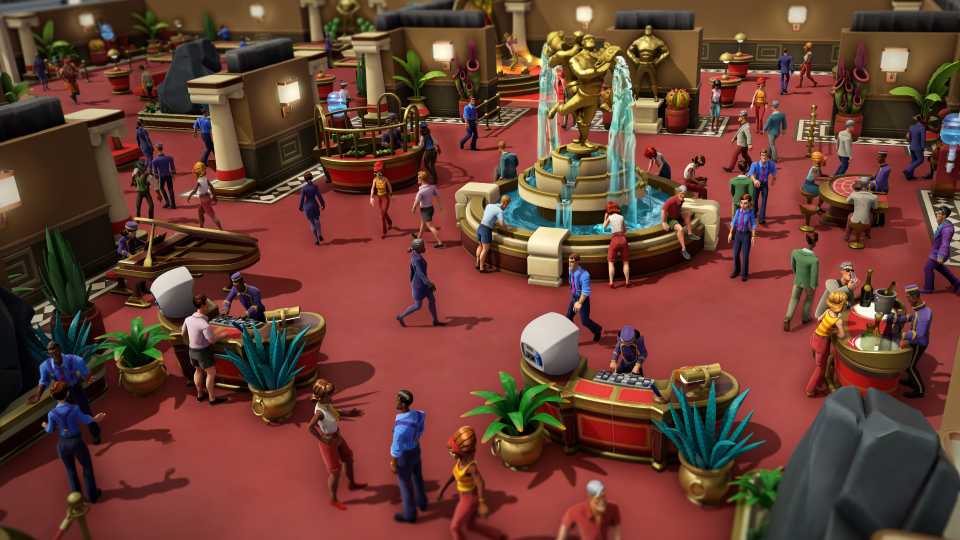 All told, it’s pretty brilliantly engaging. The only time all of this falters is when you’re inevitably waiting for something. Everything takes time – research, map operations, training minions, even capture and interrogation. Sometimes, especially early on before the game hands you a million things to do, you might end up sitting back and twiddling thumbs for just a little too long. This combines unfortunately with the fact that I think the main narrative actually sometimes drags on a little too long between major milestones as you ramp up your super-weapon and begin to use it on the planet. The general charm of the game helps to prevent any of those feelings becoming too onerous, however.

Much of that atmosphere is owed to the truly brilliant musical score, which hits all the melodic touchstones of the films this game so readily borrows from. How it swings between the dramatic and the camp also slots perfectly with the general tone, which is fun first. This is a silly, campy vision of the world, and every aspect of the game from its great over-the-top animations to just how colourful it is drives that home. It makes sense, too, when you’re hollowing out a volcano lair and fronting it with a luxury casino while seeing off larger-than-life super agents.

In truth I wish Evil Genius 2 got a little more varied in the late game, but I also can’t complain too much. Between the review period and the earlier preview, I’ve played over eighty hours of this game – there’s clearly more than enough to keep one entertained. Ultimately, you can’t beat the feeling of when everything is going well – or the sense of panic when you pan across your lair and see one of your precious power plant rooms ablaze, with the saboteurs that lit the flame now sneaking to another precious room. It’s the good kind of panic, and hitting the red alert button to bathe the lair in red light and set alarms blaring always feels satisfying.

It’d also be easy to wish that Evil Genius 2 did a little more with the concept, too. You can see gaps for expansion – like I feel there’s ample space for more to be added to combat, given how important conflict is to the game, for instance. But I also can’t blame Rebellion for starting this revival with what made Evil Genius great to begin with.

Everything that made that original game special, and ultimately a cult classic, is faithfully and lovingly reproduced here. It’s a safe reimagining, but simply on merit of all the small modernizing touches, which add up to a lot, it’s also pretty clearly a better game than the original – and considering how much I loved that game, that’s no small feat. I can see many more hours in my lair ahead – and with potential updates and DLC down the line to address some issues, true world domination could still be ahead.

Version tested: PC (Steam). A copy of the game was provided by the publisher.

The post Evil Genius 2 review – exactly the sequel fans have been waiting for appeared first on VG247.