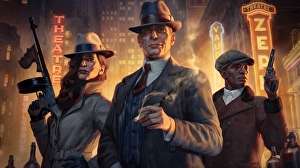 There’s a lot to like about this 1920s gangster sim. It’s an intricately detailed game about a romanticised time. And as you would expect, it has gangsters in fedoras and fur coats and flapper gear, and Tommy guns and knuckle dusters and baseball bats. Those curvy old cars and delivery trucks rumble down the cobbled, often rain-slicked streets. And behind the mundane facades of everyday life – the grocery stores and laundry houses – the illicit industries roar. Speakeasies jump with music and laughter while breweries bubble in an effort to keep up. And you can see it all in gorgeous detail, right down to the fug from the cigar smoke and the glow from the lanterns.

Perhaps more importantly, you can get right up close to the people you control, which breathes personality into the game. You can get to know the gangsters you employ, like Big Fat Gibby Willard (that’s his name!), who runs around in trousers and braces but no top, exposing his flabby upper half. He was great until a police officer strayed into a rumble we were having and he died. And now – yes – he’s dead for good.

But there are loads of other gangsters I can hire, not that I can afford them all. And they all have their own stories, own ridiculous names, own traits, own capabilities. Some love each other, some hate each other. Some are better drunk than sober. Some are courageous and others timid. They all have their pros and cons. Some can even work against you as a mole, though you’ll never know for sure. And you’ll come to know those you hire like family.