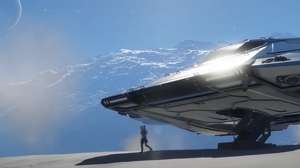 Elite Dangerous’ eagerly awaited Odyssey expansion – the one that gives you feet, among other things – isn’t too far off now, and developer Frontier has cranked its hype handle a little tighter with the release of a new gameplay trailer, debuting some first-person shooty combat.

When the paid Odyssey expansion arrives, Commanders will, for the first time, be able to leave the confines of their star ships, stretching their legs to roam around the likes of outposts, planetports, spaceports, even dustbowl-like settlements.

Here, they’ll find NPCs only to happy to dole out missions that reward credits, and at least some of those will require players to draw their weapon and indulge in a spot of laser-spewing on-foot action. Previously, Frontier explained commanders will be able to don gear, equip different munitions, and team up with fellow space adventurers as they get stuck into combat scenarios.