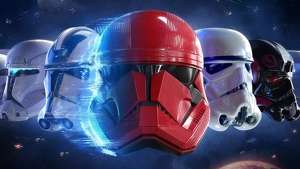 A few weeks ago we heard that after a long, long period of Star Wars games being made exclusively by EA, Ubisoft studio Massive Entertainment is working on an open-world Star Wars title, signalling that EA’s 10-year exclusivity deal with Disney will not be extended. Despite this, it seems EA still has a number of Star Wars projects in the pipeline – and has no intention of slowing down.

In an earnings call last night, CEO Andrew Wilson said EA’s Star Wars titles had made “over $3bn (£2.2bn) in net bookings” and had sold a total of 52m copies. Mobile game Star Wars: Galaxy of Heroes is a franchise worth $1bn (£733m) alone, and Wilson highlighted that EA had created a portfolio of other successful Star Wars titles including “Star Wars: Knights of the Old Republic [sic]… Battlefront, Jedi: Fallen Order and most recently, Squadrons.

“As we’ve established the very strong part of that franchise, you should expect that we will continue to invest in those as well as some new experiences across platforms for the future,” Wilson said. “…I don’t think you should imagine that the fact that some other people will build some Star Wars games is going to change our commitment to that IP or our ability to build the appropriate number of games.”