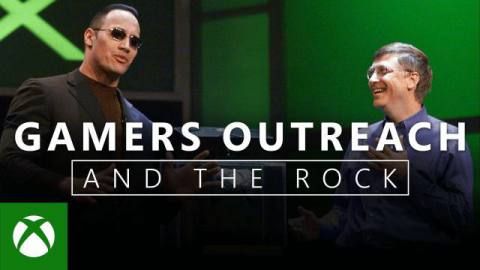 Two decades after our first partnership unveiling the original Xbox, global entertainment icon and entrepreneurial force, Dwayne “The Rock” Johnson and Xbox are teaming up to once again to celebrate the launch of the next generation of Xbox. This time, we are partnering with Gamers Outreach to give twenty children’s hospitals across the nation the very first batch of custom Xbox Series X consoles and specialized Gamers Outreach Karts, also known as GO Karts, which are portable kiosks built to easily provide recreation to children who are unable to leave their rooms in hospitals.

An unforgettable surprise for kids across the country, the custom Xbox Series X features Johnson’s iconic Brahma Bull logo representing strength, resilience, heart and power, and includes a special engraved message for kids alongside his signature summoning hope and goodwill:

“Keep smiling and have fun. Love, Dwayne “The Rock” Johnson”

Custom Xbox Series X consoles are accompanied by customized Xbox Wireless Controllers with a matching gold Brahma Bull and will be featured on the portable GO Karts outfitting the hospitals. The GO Karts were built specifically for hospitals to empower and bring joy to families through play, giving kids access to interactive entertainment and the chance to socialize via video games.

We are thrilled to partner with Dwayne “The Rock” Johnson to bring next generation console gaming to children’s hospitals across the country and appreciate his consistent commitment to bringing joy to kids’ lives through the power of play with Xbox.

To find out more about Gamers Outreach and their mission to build a world where play is accessible in hospitals, please visit www.GamersOutreach.org.