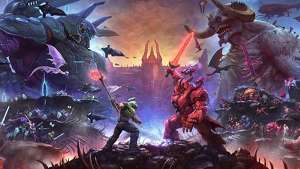 Doom Eternal is bringing its increasingly ludicrous saga to a close tomorrow, 18th March, with the launch of its second and final campaign DLC, Ancient Gods Part Two.

Tomorrow’s DLC doesn’t just put a cap on Doom Eternal, however; it also brings an end to the story of the Doom Slayer first seen in 2016’s Doom reboot, concluding with an instalment that, in among the usual hellfire and decimated cityscapes, leans hard on the high fantasy.

As seen in the trailer below, Doom Slayer’s journey to the Dark Lord’s stronghold – for one final, epic showdown – takes him to cities nestled among sprawling forests and ice-capped mountain, impossible waterfalls at the end of the world, and there’s even time for a dragon or two.