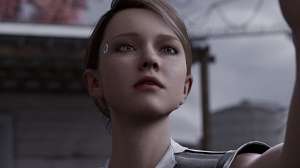 Call of Duty: Black Ops 3 joined Activision’s ceaseless procession of franchise instalments in 2015, sending the series’ reliably solid FPS action to the far-flung future of 2065. The high-tech-tinged end result earned itself a Eurogamer Recommended award back in the day, with contributor Edwin Evans-Thirlwell writing, “Where Treyarch’s single-player struggles, the deftly tuned multiplayer soars, delivering a Call of Duty that’s rich with options.”

As for Detroit: Become Human, it’s another heavily cinematic narrative adventure from the minds at Quantic Dream. This time, the studio serves up a sci-fi thriller focussed on the plight of a group of androids – and while its attempts to draw parallels with the likes of the civil rights movement are clumsy, it’s by far the developer’s most disciplined, engaging outing yet. “With this glib, rabble-rousing and admittedly enjoyable thriller,” wrote Oli Welsh in his review, “Quantic Dream has finally delivered on the promise of its interactive storytelling format”.