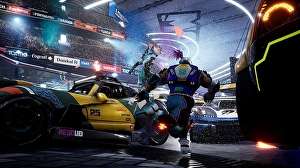 Destruction AllStars is saved, really, by PlayStation Plus. Launching as a game all subscribers can play, Lucid’s PlayStation 5-exclusive arcade racer crash ’em-up feels like a fun but throwaway download that benefits from weighing in at just 28GB – a smaller size than your average Call of Duty patch. In this context, it’s easy to give Destruction AllStars a shot on a whim, and when you discover there’s not much to it, well, that’s okay. It’s free, it’s inoffensive, and it’s a bit of a laugh. No harm done.

I cannot for the life of me work out why someone at Sony imagined this game as a £70 PS5 launch title, though. Perhaps it was once intended to be fully-featured, to have more depth, to include more modes. If it had launched alongside the PS5 at that price I’m sure it would have died on arrival, its matchmaking system begging for players, virtual cap in hand. As it stands, lobbies are full. And they are chatty. (More on that later.)

Destruction AllStars is a mashup of two different types of gameplay: arcade crash racing in an arena, and third-person on foot action. The driving part of the game feels great, controller in hand, and despite some flaky adaptive trigger feedback on R2, there’s a great crunch to the crashes. The right thumbstick is reserved for boosting forward and shifting left and right, the idea being you’re actively trying to smash up enemy cars. This means you do not have camera control while you’re driving. Thankfully, the developers at Lucid have done a wonderful job with the camera, which gives you good coverage of the arena even when you’re sent shooting upwards in a physics-defying spiral.