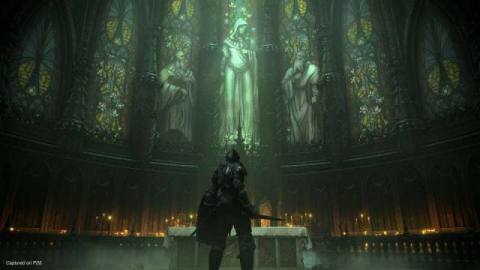 In 2009, FromSoftware’s Demon’s Souls ushered in an age of challenging action/RPGs that are defined by amazing world-building, beautiful environments, epic boss battles, and player choice. During a period when players were being inundated with lengthy tutorials and heavily guided gameplay, Demon’s Souls let us explore, discover, and triumph against incredibly dangerous adversaries. Today, Bluepoint Games’ remake of FromSoftware’s PS3 original shows reverence and adherence to the classic while providing a whole new adventure to those who got into the series later. This new vision of Demon’s Souls looks, feels, and runs like a dream.

If you’ve never played a Souls-like game before, know that the road is hard. The road is tough. The road will chew you up, spit you out, and then stomp on your splintered corpse. Demon’s Souls has bosses that are probably easier than FromSoftware’s recent projects, but some of the level design can be incredibly unforgiving by comparison. As with modern Souls games, Demon’s Souls isn’t really about the difficulty; it’s about the eventual victory, the besting of the unbeatable, and the knowledge that you can do it.

The PS5-exclusive Demon’s Souls is a painstakingly touched-up ode to the original that veterans will be instantly familiar with. From updated and enhanced visuals to some minor quality of life improvements, Bluepoint does well to only make the slightest gameplay changes to an already powerful design. Bluepoint’s deft rework allows for updated technology to enhance what was already a great game, but rough around the edges in terms of implementation. The strong gameplay of the original shines bright through it all.

Demon’s Souls demands the player be curious, careful, and bold. It’s about a wild dodge, a frantic lunge, or the self-control to not fall prey to greed, waiting until just the right moment to go in for that final strike. It’s about turning an often-chaotic chord into smooth jazz, reaching deep down into whatever spirit you have left and press on through the deadly dragons, brutal knights, and vile necromancers; to shout into the void (or your living room) that today is not the day you will fall without a fight. The eventual wins are moments you never forget.

Choosing how you accomplish those goals is a big part of the fun. Whether you want to pick your opportunities with a shield and heavy armor, assault the enemy with magical salvos, or run around stabbing foes in the back and shooting arrows, the world is yours to engage with as you choose. For my first playthrough of the remake, I went with a giant two-handed weapon, a ton of endurance, and lots of rolling. Smashing enemies into dust while balancing around my own vulnerabilities feels as good as ever.

One of the major changes that Bluepoint has made is altering how many healing items can be carried. Realistically, this does not affect your PVE experience, as you can still carry a huge supply to soak a ridiculous amount of damage. This change will have more of an impact on online interactions. Players are no longer be able to carry absurd quantities of consumables into other people’s games as they carry on epic-scale invasions with the intent to murder them. If you don’t feel like being slaughtered by someone looking to make an already intense game even more extreme, always remember you can play in soul form to keep things to yourself.

Bluepoint’s creation takes a few liberties with the source’s art direction here and there, but the overall reimagining is vibrant and awesome. The Storm King’s bizarre majesty in the pouring rain, the maze-like prisons and spires of Latria, and the depths of the Stonefang Tunnels all shine in brilliant new ways. These are not just levels; they feel like realized worlds. When the lightning bolt hit the tree in Shrine of Storms, I audibly gasped. I felt like I could feel the wind and rain as I took on the Storm King – and that’s not even hyperbole. The constant 60 frames-per-second makes a huge difference in terms of responsive, fluid combat compared to the original. Using the Archstone system, you can move from world to world at will, meaning you can take the encounters on in any order you like and explore areas out of your level/gear range if you’re feeling spicy which is a freedom that adds a lot to the game. This isn’t a new system, but it’s unlike the construction of the Souls games that came after.

Yes, the remake adds a little bit of light and visibility to dank and decrepit areas like the Valley of Defilement. Will you still get turned around and lost in the poison muck and slowly wander in the darkness until you die? Absolutely. Do the new Fat Officials look weird if you’ve grown accustomed to the old design? Yeah, sure. And I prefer some of the original soundtrack to the new takes. While some small details may upset the Demon’s Souls purists out there, the vast majority of the remake’s alterations, additions, and designs are impressive. The PS3 version hasn’t gone anywhere, and you’re welcome to play that if you prefer it.

Demon’s Souls is the predecessor to a slew of FromSoftware titles, and players can see tons of inspirations for environments and encounters that would reappear later in the Dark Souls series. Having not played the original in ages, this remake was like walking through a fascinating interactive museum in some respects, witnessing the precursors to Blighttown, the Pursuer, and many other series staples. If you’ve already played Demon’s Souls to death, the new Fractured Mode lets you add a little variety to your runs by altering the maps a bit to hopefully throw off your muscle memory and footing.

For newcomers, Demon’s Souls will be the first exploration into the duality of despair and triumph, and hopefully go on to become a starting point for new Souls fans. For veterans, it’s a homage to an experiment that kicked off a fantastic genre. Either way, it’s wonderful that the nascent ethers from the original classic have coalesced and given us this delightful treat.

The DualSense Difference
Adaptive feedback lets you really feel it when you land those big blows on a foe or when your attack is repelled. While this didn’t change the core gameplay in any meaningful way for me, it’s a nice bonus.