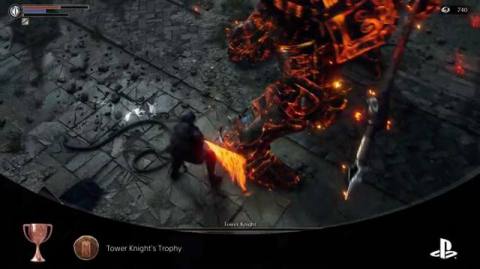 Did you know the PlayStation 5 records your microphone audio as it captures your Trophy gameplay? One first-time Demon’s Souls player didn’t – and only found out via a wonderful video that includes a rousing cheer.

Redditor helloiamjack uploaded the moment they defeated the rock hard Tower Knight boss in the Demon’s Souls remake as captured by their PS5 – and the clip includes a fantastic “yes!” followed by the kind of chuckle anyone who’s finally defeated a boss after multiple attempts will relate to.

First time Souls player. I didn’t realise that the PS5 records your microphone’s audio whenever you get a trophy. Whoops. from r/PS5

“I was getting so frustrated haha,” helloiamjack said. “The last attempt I actually realised how much easier it was if I just charged basically through his legs rather than trying to run a wide berth around him and then get behind. So much satisfaction when finished though!”

The DualSense’s microphone is on by default – you can mute it in the PS5’s settings. And it’s surprisingly decent, so if you let out a squeal when you unlock a Trophy, well, it’ll probably pick it up.

If you’re like me, you’ll be watching your Trophy clips right now just in case they contain any audio. Don’t worry, I’ll wait!

After helloiamjack’s went viral on reddit, user SCOUSETOMO2003 had a look back at their trophies and, yes, there’s a nice “yes!” after defeating the Flamelurker on the 15th try.

Seen a post about first time souls player not realising his mic was on… me too bro… this was about my 15th attempt! Didn’t know the mic was on at the end haha from r/PS5

So there you have it. Unless you mic your DualSense, it’ll pick up whatever noise you’re making when you unlock a Trophy. Just keep it clean, eh?