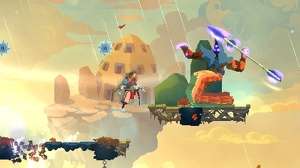 Motion Twin – or rather, subsidiary Evil Empire, which now handles Dead Cells’ development – is keeping some of the specifics under wraps for a later reveal, but has offered an early glimpse of Fatal Falls’ new biomes, Fractured Shrines and The Undying Shores, in the teaser below.